EBF was deeply involved in preparing the draft version of Part Balloon Flight Crew Licensing that has now gone to the EASA Committee for consideration and a vote at its October 2019 meeting.  EBF supports the final version as the best achievable outcome for ballooning.  After October, the Implementing Rules (IR) will be published. This may however be as late as December. The Implementation Date remains planned for 8th April 2020, with an transition period of one year during which national licences are still valid.

EASA and EBF are working on AMC (acceptable means of compliance)  and GM (guidance materials). Work has continued over the Summer and the final draft is expected in September for our review and comments. These documents must be finalised before April 2020.

This is the situation as per today and could change if EASA or the EASA Committee or Member States (MS) see a need to change the dates.

If you require any further info contact EBF at kaa@ballooning-federation.eu

Part BOP is applicable to ALL balloonists!

The big issue is that you must adhere to these rules as of today April 8th 2019. If you are a commercial operator you must read Part BOP ADD. You must have an Operations Manual and a Management Manual possibly combined.

Most of what Part BOP explaines you will already have in place we assume. In some EU countries this is compusary and other have made handbooks that are not very different form Part BOP.

We recommend that every pilot and every Operator reeds the tekst of the two sections and make sure you have your paperwork in order.

If you have any questions please contact the European Ballooniong Federation (kaa@ballooning-federation.eu )

The link to the full version of part BOP can be found in: (pls start at page 18!) https://www.easa.europa.eu/sites/default/files/dfu/Balloon%20Rule%20Book.pdf

On September 14th EASA published the AMC and GM (Acceptable Means of Compliance and Guidance Material) for the Declared Training Organisation DTO.

As you will remember EASA had planned to have the Training of balloon pilots in the Approved Training Organisation (ATO). We as the European Ballooning Federation have together with others objected to the complexity of the ATO for ballooning. We have been part of a working group on behalf of all balloonists to symplify the training organisation. We have been succesful in writing the Declared Training Organiosation (DTO) We now have a Europe wide less complex system as compared to the ATO but in some countries still more complex that you have today.

You can also find the introduction of EASA to the new DTO structure under: https://www.easa.europa.eu/node/46126

We would like to keep you up to date on the latest developments regarding new legislation being prepared at EASA. As we all know the Operations laws and regulations will enter into force as at April 8th 2019. All commercial activities will have to be declared by that date and all operators big or small will have to have an Operations and Management Manual. Please make sure that you have that in place by April 8th of next year. You can read what is needed in the AMC (Acceptable Means of Compliance) of Part BOP (https://www.easa.europa.eu/sites/default/files/dfu/Balloon%20Rule%20Book.pdf )

During the 6 monthly EASA GA Com meeting, where EBF is represented, the new Balloon FCL was discussed and the latest proposals presented. There will be a written procedure for all National Aviaton Authorities to respond to the proposals. After the written procedure the proposals will be presented at the EASA Committee meeting in februari 2019. The new legislation will be in force April 8th 2020.

Attached the presentation that summarises the situation as of today. Please bear in mind that this is a final proposal and not yet legislation. Thing will change! In order to keep you informed about the progress that is being made we attach the presentation (amended).

If there are any questions or suggestions pls contact kaa@ballooning-federation.eu or one of the board members. 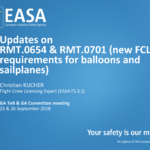 Having been involved in many meetings about EASA rulemaking we are now in a position to give you some new information.

For balloon operators there is little direct change. All balloons under 42.000 ft³ will fall outside EASA and are governed by National Law. This should make it easier to get approval for new aircraft and parts. It has become clear that for some current NAA – National Aviation Authority-work a Qualified Entity can take over the NAA tasks. It also states that NAAs should actively promote aerial sports and other flying.

We are currently working on a paper making clear all differences between the old Basic Regulations and the new.

The final publication was made of the DTO ( Declared Training Organisation) as replacement for the ATO (Approved Training Organization) earlier this month. Declaration for new Training Organisations can be made early in September this year. The lack of complexity and operating ease of the DTO will be welcomed by many and the administrative ATO will no longer be needed for ballooning and light aircraft and sailplanes. The full text can be found at the EASA site https://eur-lex.europa.eu/legal-content/EN/TXT/?qid=1535746892364&uri=CELEX:32018R1119

We have had the final meeting in June during which all NAA’s and other parties could make their opinions known. We are now processing the comments and hope to be ready by the end of the year. Introduction April 8th 2020.

As we have published before Part BOP will enter into force at April 8th 2019. All commercial balloonists will have to prepare for this and hand in the DECLARATION as of that date. Please note that you cannot operate a balloon commercially without have made the declaration to your NAA.