The assembly started at 10:00 am at the Paris CDG Sheraton. Attending members signed the presence sheet.

Then PL & KA started to read and comment 2015 report, detailed on attached power point presentation, explaining what EBF did during the year, since the original meeting with EASA on march 21st 2015, about :

Part M, and the creation of Part ML (light).

Part FCL, which had to be interrupted during the year, but is starting again with an EBF lead in 2016

Part ATO, where a large consensus was obtained for the “RTO” (R as registered), which allows to start a training organization with a declaration instead of an approval. While everyone agreed, EASA’s jurists decided that “registration” is contrary to the basic regulations, but we have hopes that this argument will not be considered by the EC.

Part OPS, which is nearly completed, less a few subjects which will be seen during the next meetings

As Thomas Herndl, Treasurer, could not attend, the president showed the bank statements to the audience, and proposed a budget for 2016 (see ppt presentation).

The budget was accepted, but Jan Andersen suggested that a proper balance sheet should be made for 2015 (until now we only have the bank statement). This will then be done within the next weeks.

2015 report (moral and financial were approved.

Thomas Herndl having stepped out from his post of Treasurer, Philippe de Cock was elected Treasurer, and Jan Andersen Deputy Treasurer, so that they could share the work.

A new bank account will be opened, preferably in Paris for the practicality of signatures. Pl and PdC will take care of this.

Thomas Herndl will be, if he accept, Vice president.

There was a discussion about how to better communicate towards the members, and better explain the changes. We decide to create a simple presentation which would be put on EBF’s website. The FB page would be used only to direct people to the website and invite them to join EBF.

Another discussion was about the future of EBf: when all regulations will be complete (in 2018 ?) EBF should be a watch for all ballooning regulatory matters, and also come to help member countries having national problems (ex: transport of gas tanks in Denmark). So EBF should ask members “How can we help you?)

The meeting ended at 3 pm with a photo of the new board. 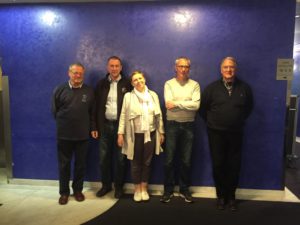